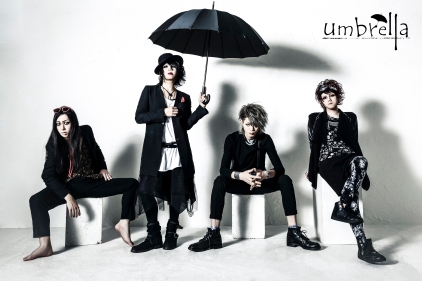 umbrella bravely and brilliantly won the “DEAD WEST” and “FINAL IMPACT” battle of rookie recruiting battle event J-ROCK EXPLOSION 2014 “BATTLE OF THE BRAVE” by MAVERICK DC GROUP and Sony Music. umbrella became the representative band of” DEAD WEST” which is a rival band of “DEAD EAST” representative who got through the preliminaries in Tokyo, after released 2 compilation albums and went on tours 4 times. On December 5th of 2014, umbrella won the East-West battle “FINAL IMPACT” which was held in Osaka brilliantly.

umbrella is a Kansai (west part of Japan) born 4-piece band consisting of Yui (vocal & guitar), Shu (guitar), Hal (base) and Sho (drums). Their inspirational songs and shocking performance elevated the popularity of the band ever since umbrella was started in March 2010. After going through line-up changes, the current members were fixed in August 2012. They already experienced some shows outside of Japan, also performed at Saitama Super Arena. Their beautiful, flaming, wistful music holds an umbrella over your heart. No explanation is needed when you listen to their songs – umbrella’s sound will swallow you.
Gan-Shin Records is happy to present umbrella’s first album “Kinematograph” with 7 amazing songs to you, which is simultaneously released in Europe and Japan