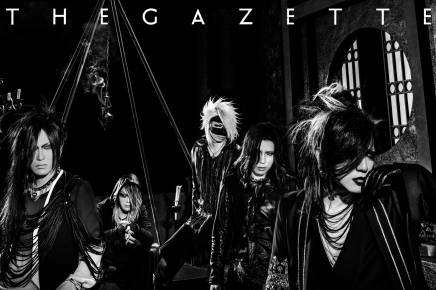 the GazettE, one of Japan’s leading heavy rock bands, returns with eighth album DOGMA, will be released on CD in the UK and Europe through JPU Records on 2 October, and digitally from 26 August, one week ahead of its digital release in Japan (2 September) and the rest of the world (4 September).

It follows 2013’s BEAUTIFUL DEFORMITY release, which peaked at number five in Japan’s Oricon Weekly Album chart, as well as making top ten in global iTunes charts as the band conducted their first world tour.
To celebrate the release, JPU Records will also be re-releasing the GazettE’s first three major-label albums NIL, STACKED RUBBISH and DIM, both digitally and hardcopy. 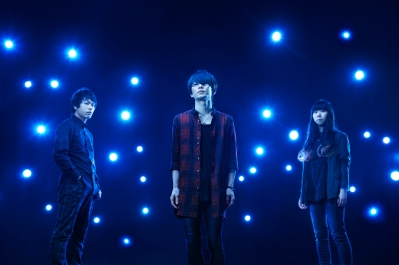 Entitled Best of Tornado, the 14-track album features songs spanning the trio’s 10+ year career, from their early self-released album and EPs to their recent chart topping album still a Sigure virgin and last year’s i’mperfect. Each track has been brought up to date by being brilliant re-mastered by Metropolis Studio’s John Davis (Led Zeppelin, Royal Blood, the Prodigy).

Best of Tornado will be available in the UK and Europe from 8 July 2015 digitally from Amazon MP3 and iTunes, and available on CD in the territory from 7 August 2015, it can be pre ordered here

Japan’s alternative idol group Dempagumi.inc has confirmed the international release of their album W.W.D.D. through London’s JPU Records, following their first UK performances at HYPER JAPAN at The O2 on Saturday 11th and Sunday 12th July 2015.

A number of tracks on the album have been written by prominent figures in the Japanese rock industry, including Tamaya 2060% of punk group Wienners, NAOTO from popular hip-hop rock act ORANGE RANGE, and anime theme composer and video game music remixer Kenichi Maeyamada amongst many more.

W.W.D.D. on CD will include a 28-page full colour photo and lyric booklet and will be available first at HYPER JAPAN, ahead of its official retail release from 7 August 2015. Digitally, the album is out now on iTunes and will be made available from other digital download and streaming services shortly.

Japan’s ‘visual kei’ veterans the GazettE will release their first three major-label albums in physical and digital formats in Europe through London’s JPU Records, ahead of the release of their hotly anticipated eighth album DOGMA.

Breakthrough album NIL (Nameless Liberty Underground) saw the group emerge from Japan’s underground visual kei scene and become one of the biggest, most influential names in the genre. When released in 2006, the album reached number four in the Oricon Weekly Album Chart and the tour surrounding it brought the GazettE in front of 20,000 fans for its finale at The Nippon Budokan, the country’s most revered venue. NIL will be available from 10 July in the UK and soon after in the rest of Europe.

Follow up album STACKED RUBBISH gave the band their highest chart position to date, reaching number three in Japan’s album chart in 2007 and redefined visual kei in the process. The album experimented with elements of R&B, jazz and blues, and incorporated into the band’s existing heavy, aggressive and dark sound. The results crossed boundaries, even countries, as the GazettE embarked on their first world tour, including a show at a packed out O2 Academy Islington from word of mouth alone. STACKED RUBBISH will be available from 14 August 2015, and had several tracks available to buy in advance from iTunes right now, including fan favourites Filth in the Beauty (one unofficially uploaded video of the song has over five million hits on YouTube), high-energy anthem HYENA and the moody theme to the domestic release of Korean horror flick APT; Chizuru.

The last of this year’s re-releases will be DIM, an album described as having riffs as “heavy as the soul of Dracula” and sounding like “Slipknot playing Powerman 5000 covers” by AllMusic’s Alexey Eremenko. Leading up to its release, the GazettE managed to shut down part of Shinjuku Station, the world’s busiest transport hub, when several thousand fans turned up to the secret event. DIM includes the group’s first single to reach number two in the charts, LEECH. The album will also be released on 14 August 2015, with several tracks available now from iTunes.

The CD editions of the albums include the original photo and lyric booklets, as well as an all-new booklet containing new images and the lyrics translated into English and Romaji.

One of Japan’s leading all-girl groups, SCANDAL, will release a special collection of their greatest hits exclusively in Europe on 4 May 2015.
The powerful Japanese pop-rock band is currently preparing for their first world tour, taking place between April and May. To mark the occasion JPU Records will release a special compilation CD of the band’s biggest singles and fan favourite tracks.
Entitled GREATEST HITS – EUROPEAN SELECTION, the album will be SCANDAL’s first to not be released in Japan, and is instead exclusive to the UK and Europe. The collection features 15 tracks, including their feisty debut 2008 single DOLL – which has racked up over one million hits on YouTube – as well as seven of their top-ten chart smashing singles (Oricon Weekly Singles Chart) and four catchy pop-punk songs featured as theme-tunes and insert songs from popular Japanese anime.
This will be the first time several tracks from SCANDAL’s back catalogue has been made available outside of Japan, and includes a booklet containing lyrics translated into English and Romaji. This album will not be available for digital download or streaming. 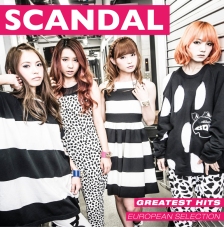 “13 years have passed since the GazettE formed.
This eighth album was born out of the band’s struggle attempting to metamorphose.
This is the beginning of everything stained by the darkness and dogma.”

Fresh from the band’s sold out 13th anniversary event at the legendary Nippon Budokan on Tuesday 10 March 2015, the GazettE reveals THE BEGINNING OF OMINOUS YEAR PROJECT by unleashing the first video teaser for upcoming album 「DOGMA」 scheduled for release this August in the UK and Europe from JPU Records.