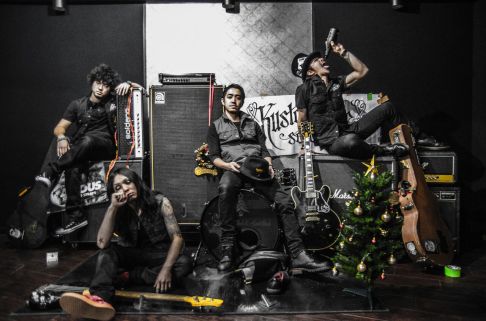 X’MAS (X Made Alcoholic Santaclaus) was started by the band’s guitarist CHARLIE and his friends back in 2013, in the city of Yokohama, Japan. The guys had known each other for years, as they had previously played together in several different bands (like STUD, STAB, and others), and had performed for many events and festivals before finally creating X’MAS.
They describe their sound as « Loud Heavy Rock n’ Roll ».
The 4 « Alcoholic Santaclauses » want their music to bring something special and joyful to people all over the world.
X’MAS is also involved with several other activities, like CHARLIE’s own project “KAKEJIKU” and a collaboration with the Japanese fashion brand “KUSTOMSTYLE”.

HIGHFeel have made a promise of announcements, regarding upcoming  shows with local bands for later in the year, to come soon…